This article explores the use of biodegradable materials in 3D printing, and the future prospects of these materials.

3D printing has opened up a world of manufacturing possibilities. This additive manufacturing process is used to manufacture both simple and highly complex parts fast, and at low cost. There are various types of 3D printing technologies in use today. However, many of them follow the same broadly defined working principle; a material is heated to a semi-molten state and deposited layer by layer by the 3D printer, using the information provided by a CAD model, until the part is formed. The process of 3D printing requires materials to be able to undergo melting, reshaping, and resolidification or undergo curing without significant changes in their properties.

As a result of this, thermoplastics, which possess the required characteristics, are the most commonly used materials used in 3D printing. However, plastics are not biodegradable. They pose risks to the environment if not properly disposed of. For this reason, immense effort is being made to develop biodegradable (environmentally friendly) materials that are compatible with 3D printing and can be used to create fully functional parts.

In this article Xometry overviews biodegradable 3D printing materials that are already available on the market, like PLA, and those that are still being developed for efficient 3D printing.

PLA (Polylactic Acid) is the most popular and accessible biodegradable plastic used in 3D printing.

PLA is used mainly in the combination with FDM 3D printing. It is a thermoplastic and can be melted and reshaped without losing its properties. It also has good mechanical properties that can be compared to polypropylene and polyurethane. Its thermal properties are satisfactory but not great when compared to ABS.

Some of the benefits of PLA are as follows apart from it being biodegradable:

Some drawbacks, on the other hand, are:

PLA is widely used in cutlery, food packaging, health care, textiles, and cosmetics. It is one of the most ubiquitous 3D printing filaments.

Feel free to choose PLA as one of the options among Xometry’s offering of 3D printing materials.

PHA (Polyhydroxyalkanoates) is a bioplastic that is produced by cultivating specific bacteria. The material is synthesised in the cells of the bacteria and is extracted as highly reflective granules.

PHA is far less popular in 3D printing than PLA and is still undergoing development. Currently, it’s practically unavailable in the market and is, therefore, more expensive. On the positive side, it biodegrades much faster, taking as little as one to three months to degrade. The properties of PHA polymers vary slightly based on their chemical composition. They are thermoplastic, elastic, and have good moisture resistance.

Some of the benefits of PHA are as follows:

Some of its limitations are:

PHA is still undergoing a lot of research for use in 3D printing. The majority of this material’s current usage is in creating composites with other plastics.

Fungal like additive material (FLAM) is another natural material that can potentially revolutionise 3D printing. FLAM is made from cellulose and chitin, two of the most bountiful polymers on earth. This highly versatile material can be adapted for woodworking, casting, moulding, and 3D printing. Its mechanical characteristics are near identical to polyurethane foam. FLAM is a very new material that is not readily available on the market and still requires further research. However, it is already showing a lot of potentials as can be seen in this study.

Some of the benefits of FLAM are as follows:

The limitations of FLAM include:

Because of the limitations inherent in many biodegradable materials, composites, which are a combination of two or more materials to form a new material, are being developed and used. These composites combine the advantages of the parent materials, often cancelling out or significantly reducing their limitations. Some biodegradable composites that are available for 3D printing include:

But they are still not widely used.

While they are not biodegradable, filaments made from recycled plastic are environmentally responsible, as they are made from plastic that would otherwise have ended up in dumps. The majority of the popular plastics used in 3D printing are recyclable.

With the world now more aware than ever of the dangers of plastic pollution, different steps are being taken to reduce the use of plastics. One of these steps is the development of biodegradable materials that can be 3D printed in order to harness the power of this remarkable manufacturing process while protecting the environment.

At this time, however, the only vastly available biodegradable 3D printing material is PLA. Upload your models on our instant quoting platform to get a quote for your PLA parts from Xometry. 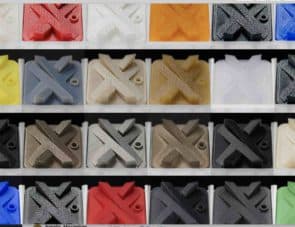